We will discuss what different type of networking equipment you might run into and explain what the differences are.

A HUB is essentially just a box with wires interconnected inside. Everything that is received on one port is transmitted on all other ports. It can’t change the traffic that is running through or manage traffic. It is not frequently used in network setups today as it is slow and creates a lot of issues such as collisions. Hubs operate on layer 2. This means that devices on different subnets cannot communicate with each other through a HUB. A HUB will allow Broadcast packages to be sent to all devices on a network. 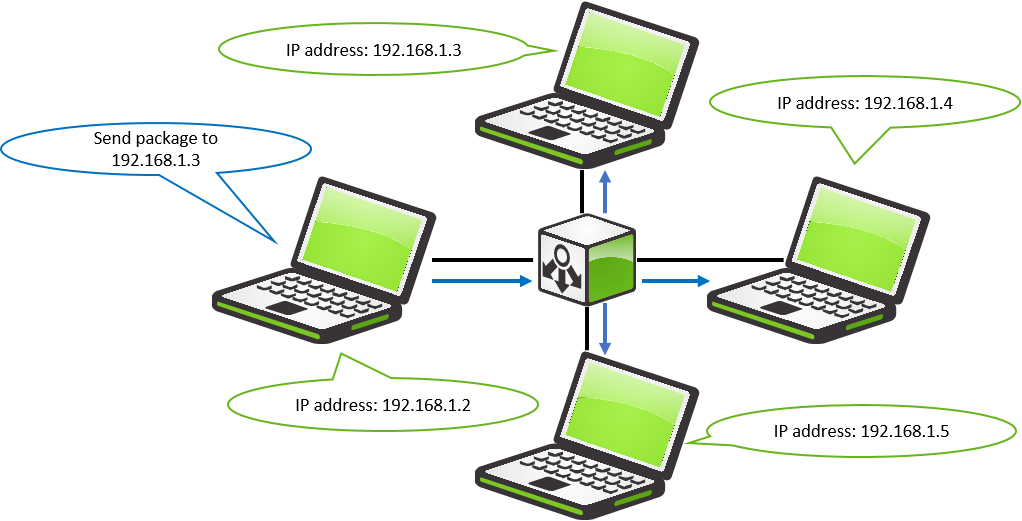 A Switch acts a lot like a hub where devices that that are connected to it can communicate with each other, but in addition to this, a Switch makes sure that communication is only being sent to the device that needs it, and makes sure that no packages collide. A Switch like a HUB also operates on layer 2, and has the same restraints as the HUB. A Switch will allow Broadcast packages to be sent to all devices on a network. 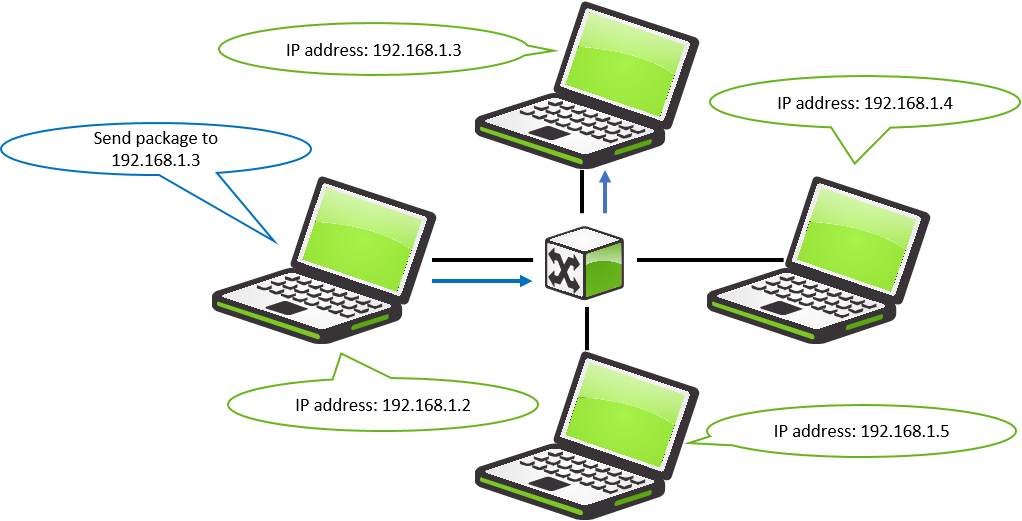 A Router is a device that can establish communication between different networks. This is most often used to make sure that devices that are present on a local network can access devices on the internet, though this can also be used in companies to separate their networks from each other. A router is very different from a Switch or a HUB as it operates on layer 3. A Router will not allow broadcast packages to be sent on the remote network.

A private IP address is the address space allocated by InterNIC to allow organisations to create their own private network. There are three IP blocks (1 class A, 1 class B and 1 class C) reserved for private use. The computers, tablets and smartphones sitting behind your home, and the personal computers within an organisation are usually assigned private IP addresses. A network printer residing in your home is assigned a private address so that only your family can print to your local printer.

The OSI model is a representation of the different “layers” that networking has. It is used to describe what’s going on when devices are interacting and how traffic is being packaged on the way to its destination. When a packet is sent from PC1 to PC2 the packet is first packaged one by one by each layer until it has been sent over the physical connection to PC2. When PC2 has received the package it will open up the package on each layer, making sure that it is the intended destination for this package in each layer.

This layer represents the visuals that you are working with, this could be anything from our GateManager's interface, to Internet radio stations.

Layer 6-5: The Presentation and Session.

These layers are handled by the operation system, and network drivers to send the data correctly through the OSI stack.

This Layer is responsible for maintaining protocol communication. (Handles the overhead packets in protocols such as TCP, UDP and more.) These are packets like segmentation, acknowledgement and multiplexing.

This layer is the one responsible for managing higher-level communication like IP addresses, routing and Traffic Control. This is the layer most agents in a SiteManager operates on, as this traffic can be routed over the internet.

This layer is responsible for managing the physical addresses that are being used to communicate locally with devices. (MAC address) This also means that you cannot communicate with devices on other networks, as they are separated by routers. This is only used in very few agents on a SiteManager. (Used in the Forwarding, Scada and Layer 2 agent.)

This is the physical media that is transmitting the connection from device to device.

In this section, we will look at the most popular protocols that are being used to communicate between devices on a network.

What is a protocol?

The protocol is used to package a packet so it will be received by the receiver in the most optimal way. Some protocols will not accept any errors in the communication where others will accept some loss, it all depends on the need for the transmission.

TCP (Transmission Control Protocol) is used when you need to make sure that the product that is being sent over the internet arrives intact. This is handled by the protocol ensuring the communication can be established to the end device before starting the data transmission. TCP also awaits an acknowledgement of receipt from the end device. This is done with every package and ensures that 100% of the data has been received.

UDP (User Datagram Protocol) is mostly used when you are more interested in the speed of the transfer of the data, and not as much in the integrity. You see it most often when you are watching a video on the internet, or speaking to people using VOIP. If, in these cases, you are missing some packets, or receive them in the wrong order, then this will not be disastrous. As opposed to a TCP package we do not look for any acknowledgement packages, UDP is more interested in the number of packages that can be sent over the connection as quickly as possible.

ICMP (Internet Control Message Protocol) is used by appliances to send information to other devices. This can be anything from error messages to responses about services that are unavailable. ICMP is not available to end-users as its main purpose is to enable communication between devices on a network. The main exception from this is that some diagnostics tools like PING and Traceroute rely on this protocol.

This section will give you a better understanding of what Natting is, and how it’s important for communication between devices.

NAT (Network Address Translation) is the practice where a device on one side of a Firewall is translated to another address on the other side. This is a way you can make sure that devices on your local network don't get shown to the outside world.

Nowadays NAT is not used that often as this is a one-to-one conversion. If you have multiple computers on a local network, then only one of them would be able to access the internet at the time through the router.

PAT (Port Address Translation) is often referred to as NAT. PAT Is used to gain the same result as NAT but improves on it by allowing multiple internal devices to communicate through a single IP address. This is accomplished by binding each outgoing connection to a single port. So, if we are in a network with 30 computers, and they all want to access 94.237.31.13 at the same time then they would be able to do this. Each connection to 94.237.31.13 would be sent with the same address (1.2.3.4) but in this case, each connection would get a unique port assigned to the from address. (1.2.3.4:20000 1.2.3.4:20000 and so on.) This way we would be able to figure out who should receive each package that is sent back from the webserver. 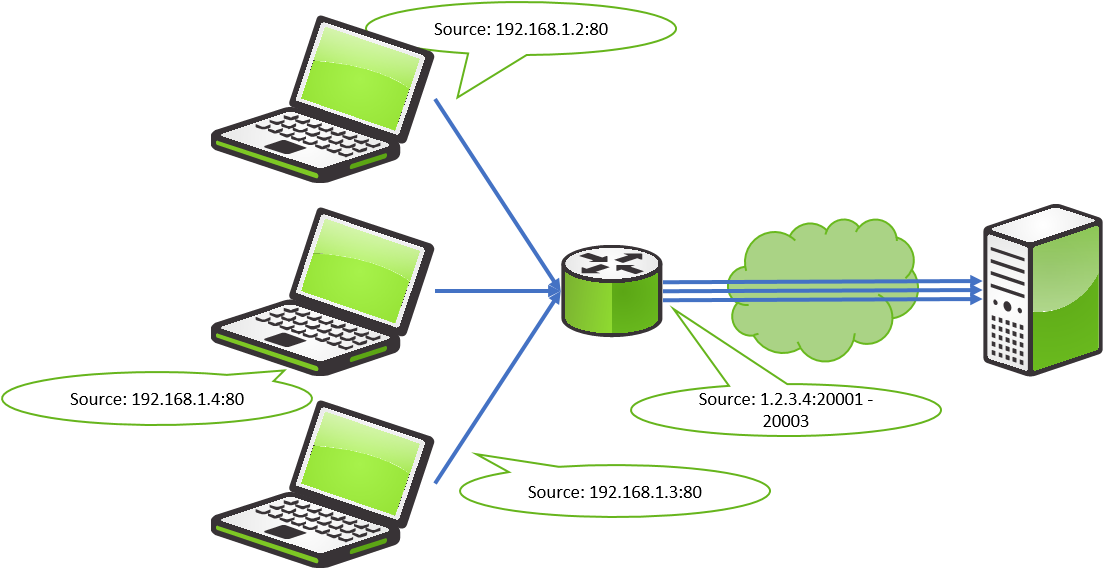 DNS (Domain Naming System) is the library that allows us to translate addresses that we can read and remember as humans into addresses that computers can understand.

Where are DNS servers?

When it comes to DNS servers, these are the ones that you have locally on your network, which can either be some that have been installed intentionally or as part of some networking equipment that your ISP has sent.

If, however, your DNS server does not know the result of secomea.com then it would have to forward the request to the internet ROOT DNS servers. These servers will then be responsible for figuring out what IP address secomea.com refers to and sending the result. And send the result back to your DNS server, which will send the information to your computer. 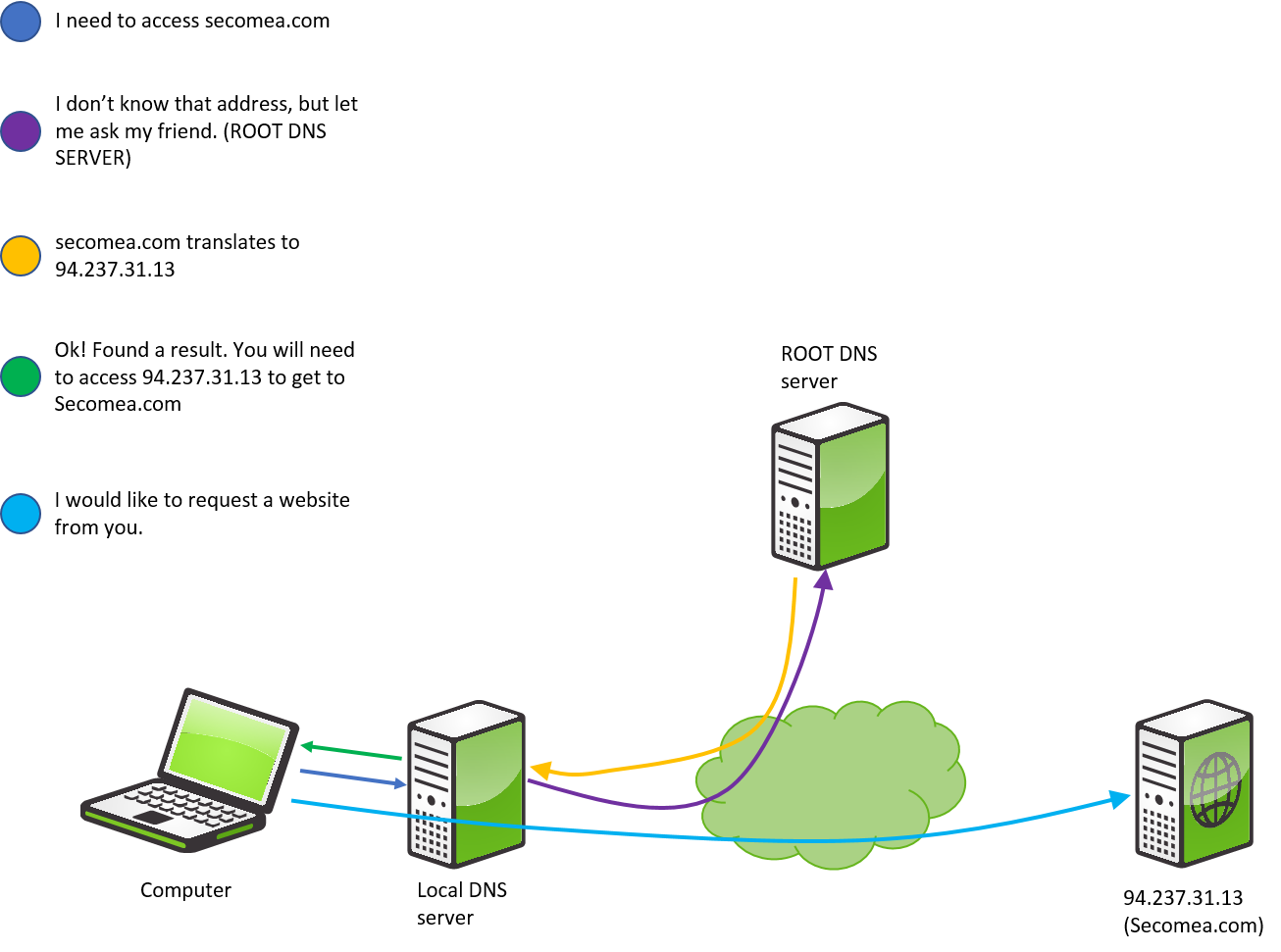 In this section we will go into detail about what the different communication types are. These are concepts that different layers utilise to communicate in a specific way to end devices.

Broadcast is used to communicate with all devices on a network, mostly on layer 2 (ARP or DHCP being an example) but can also be used on layer 3 in some cases.

This feature is great if you need to find a specific device’s IP address and you don’t know who it belongs to. Sending out a broadcast will ask everyone on the network who has a specific IP address and only the one that has that IP address will respond.

Broadcast packages are stopped by Routers/Firewalls. This ensures that they can only be sent on an internal network. Therefore, you cannot broadcast a search for a device through LinkManager without using a Layer 2 agent. 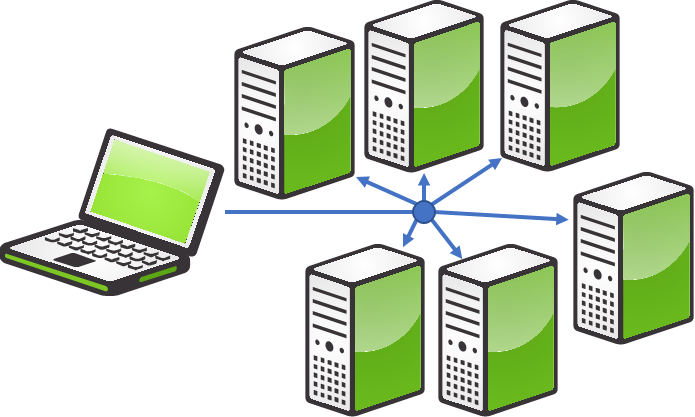 Most communication made to other devices from your computer uses Unicast. When you access a device on the internet or access a local device like a printer, then you are using Unicast. This communication is one to one. Unicast is used both on layer 2 and 3. When you send a package to an IP address the communication will be encapsulated in a Layer 2 package. 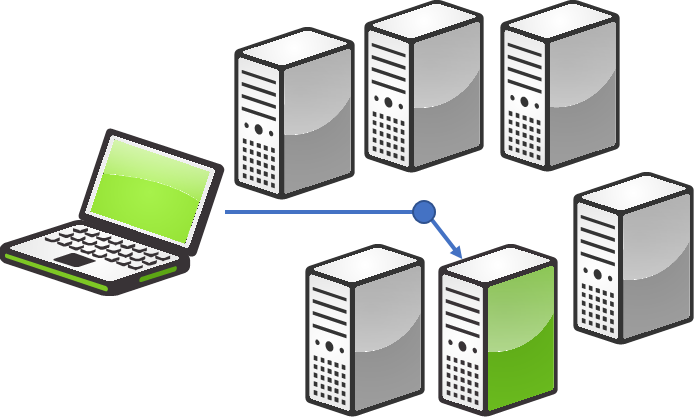 DHCP (Dynamic Host Configuration Protocol) is a way of dynamically and automatic assigning IP addresses to devices on a physical network. It’s used in almost every network to make sure that computers do not need any manual configuration to connect to local devices or gain access to the internet. In some special cases, static IP addresses may be desirable over DHCP.

How does DHCP work?
DHCP works on layer 2 in the OSI model. This means that when a device needs an IP address, it can only request one on the same network that it's present on.
The whole DHCP process is called DORA. This stands for:

What happens if no DHCP server is available?
This is different from device to device. In most cases, your device will receive an APIPA (Automatic Private IP Addressing) address. This is a random IP address that your device will assign to its own network card. This IP address is in the 169.254.x.x network. Getting this APIPA Address does not mean that you will be able to use your device in an intended way, as it is an automatic function that activates if your network is experiencing issues.

Was this article helpful?

By entering and using this site, you consent to the use of only necessary cookies to enhance your site experience and improve our services.